GladDiscs is the new record label for recordings issued by Neil Gladd Publications!

In 2022, a change in the U.S. Copyright law made it possible for the first time to reissue early sound recordings, that were first published before 1923. The beginnings of the recording industry in the late 19th and early 20th centuries coincided with the "Golden Age" of the mandolin, so many of the early soloists made at least some recordings on cylinders or 78s, some of them quite a lot! I considered publishing a sampler CD, with one recording each by many different soloists, but decided, instead, to use my YouTube channel for that, and focus on early Italian mandolin soloists for the first CD. 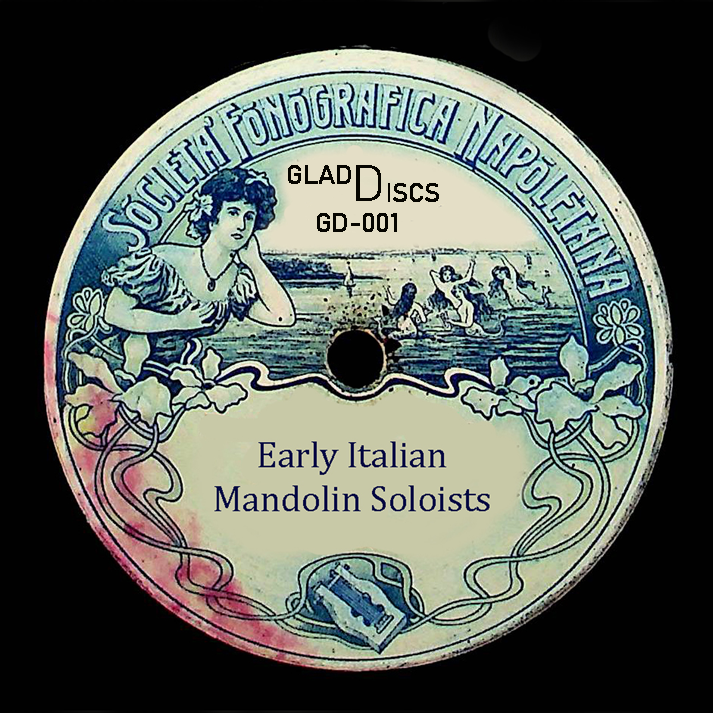 70 minutes of music on 26 tracks, of which 24 have NEVER been reissued, before! They were all recorded between 1899 and 1917, and the artists include:

In addition to hearing 6 different soloists playing their own music, you will also hear 3 different types of instruments. Most of the soloists were playing the Neapolitan mandolin with 4 pairs of strings, but Alfieri played the Milanese mandolin, with 6 single strings, and Leonardi recorded on a banjolin, a 4 string mandolin-banjo. (!)

All recordings are from the personal collection of Neil Gladd, who wrote the liner notes on the recordings, but the liner notes for the performers were written by mandolin soloist and musicologist, Ugo Orlandi.

The digital album with digital booklet will be $20.00, the CD will be $20.00 plus shipping. I may be accepting pre-orders, soon, and this page will be updated as news become available! 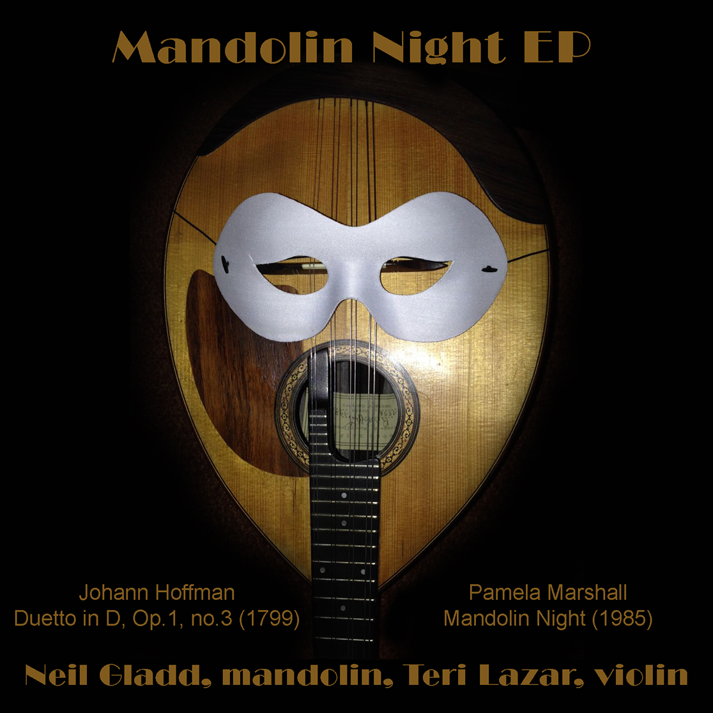 These tracks had originally been released on the 1998 compilation CD, Mandolin X 4.

Two original compositions for the mandolin, written 186 years apart! Johann Hoffman wrote a concerto and a number of chamber pieces for the mandolin. This duet for mandolin and violin was published in 1799, and was recorded from copies of the original parts in the British Library. Mandolin Night was written in 1985 by Pamela J. Marshall, and was one of the first pieces to be written for Neil Gladd. It incorporates duo-style (playing some notes with tremolo and other notes without tremolo, at the same time), plucking the strings with a finger, and scordatura. At the beginning of the piece, one of the E strings is tuned down to a C#, then WHILE PLAYING, one of the G strings is tuned down a quarter tone, for a short quarter tone passage, then it is tuned down further to an E flat for the remainder of the piece.

Samuel Siegel (1875-1948) was the most recorded mandolinist in the first decade of the 20th century, and from 1900 to 1910, he had recorded discs for Berliner, Victor, Columbia, Climax, and Zonophone, and cylinders on Edison, Indestructible and Amberola. He often recorded the same titles for more than one label, which gives us the opportunity to to choose the best performance from multiple recordings of each piece. This will be a digital release so that it can include more music than would fit on a CD!

I am still considering other future projects. I have the complete recordings of both Valentine Abt (1873-1942) and William Place, Jr. (1889-1959). Players such as Bernardo de Pace (1881-1966) and Mario de Pietro (1896-1945) each deserve to have an entire CD devoted to them, but  many of their recordings will still be under copyright for a few more years. In 2028, MANY great mandolin orchestra recordings from Italy and Germany will become available!

In 2005 I began recording a CD of contemporary American mandolin music. It was never completed, but I still have the unedited raw recordings, and will start to edit them next year. I will also be making some new recordings of my own, primarily my own compositions, works that were written for me by other composers, and some historical works that have never been previously recorded.

I have a few boxes of the first two releases on the Plucked String Discs label (New old stock, still sealed.). These are available on LP, only, and once they are gone, they will not be reissued. 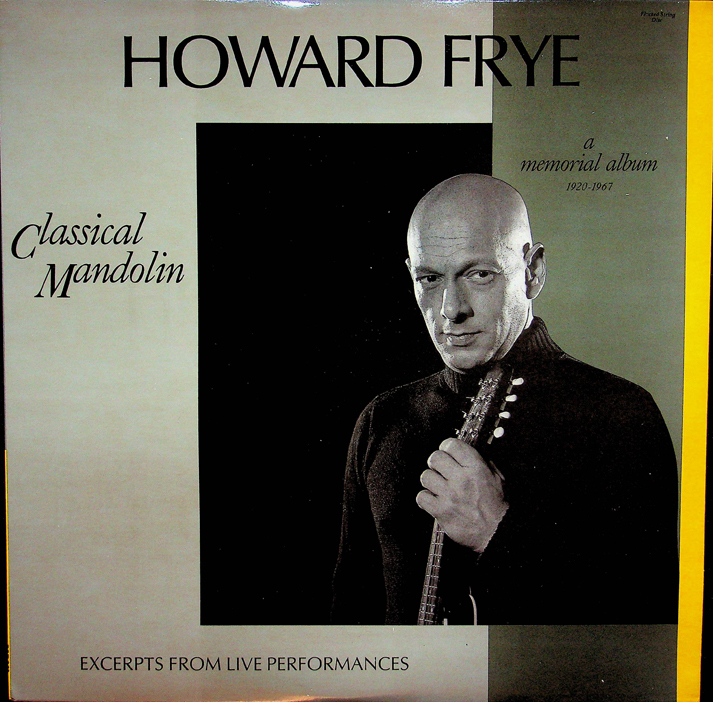 The sheet music for Luigi Paparello's Bells of Night is included in the collection, Four Centuries of Solo Mandolin Music. 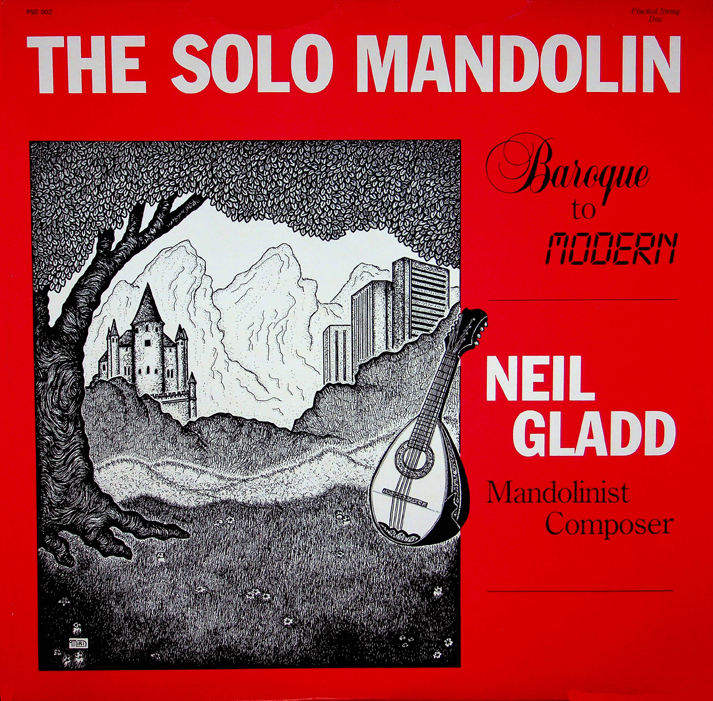 I do not have the master tape, or I might have reissued the Bach Partita. I would prefer to make new recordings of my original compositions, but the Bach Partita is not something that I would record again, as I am now more interested in recording only original mandolin music.
The sheet music for Partita a Dodici Toni (1982) and Sonata for Solo Mandolin (1983) are both available from Neil Gladd Publications.

Leone's De Samodeste Mere and Aubrey Stauffer's Storm at Sea are both included in the collection Four Centuries of Solo Mandolin Music.